The report study has analyzed the revenue impact of COVID -19 pandemic on the sales revenue of market leaders, market followers, and market disrupters in the report, and the same is reflected in our analysis.

Human augmentation is the latest advanced technology that intends to augment the mental and physical capabilities of the human body by using artificial, scientific, and natural technology. It is also called as human 2.0 and human performance enhancement (HPE). 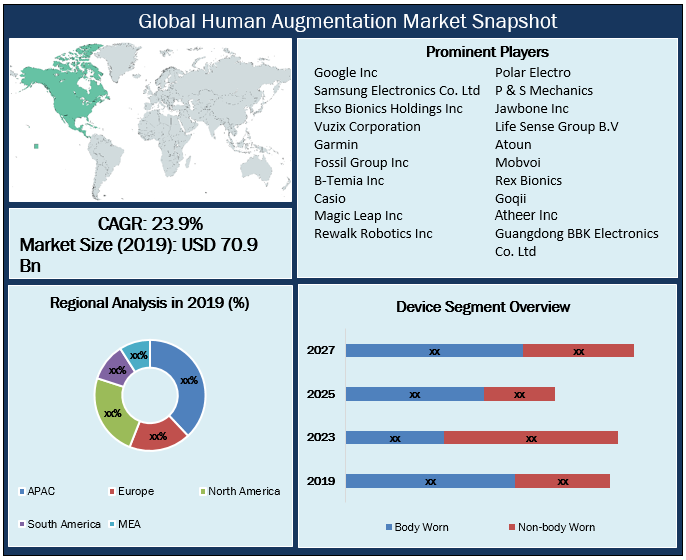 A surge in the exploration and adoption of marketable and innovative applications for human augmentation technology byentrepreneurs, engineers,policymakers, andresearchers across the globe is a major driving factor behind the growth of the market. Increasing requirements of augmented technologies such as augmented intelligence to perform several tasks without replacing humans, increasing demand of wearable augmentation products, rising adoption of human augmentation in the healthcare sector, growing advancements in technologies such as human genetic engineering, 3D bioprinting and in neurotechnology, rising adoption of IoT, smart tech devices and rising advancements in robotics automation, andartificial intelligence technologies are expected to improve the growth of the marketduring the forecast period. Nevertheless, high costs associated with human augmentation devices, social, legal, and ethical concerns, lack of skilled personnel to handle human augmentation devices, and rising risks of identity and data breaches are some of the restraining factors that could hamper the growth of the market.

By technology, wearable augmentation segment dominated the market in 2019 and is projected to witness fast growth at CAGR of XX% during the forecast period. Growing adoption of smart wearable devices such as wrist-wear, eye-wear, foot-wear, neck-wear, and body-wear devices such as smart glasses, HMDs, HUDs, smartwatches, smart jewellery, and smart clothes by consumers across the globe is attributed to the growth of the market. MMR expected that industrial wearable human augmentation devices will witness huge demand in the North American market in the coming years due to its portability, efficiency, and convenience. Increasing the adoption of medical wearable devices in the healthcare industry is propelling the growth of the market. Some examples of wearable human augmentation: There are numerous wearable augmentation devicespresent in the global market. Growing adoption of these devices by consumers across the globe to enhance their physical capabilities such as low vision is impelling the growth of the market. Some of the examples of these devices are as follows: • ESight- It is a wearable augmentation device and its appearance looks the same as glasses. This device provides blind persons with the capability to see their surrounding environment. • Exoskeletons- It is a mechanical wearable device that is used to wear on the outside of the body. This is the type of industrial wearable device which is used by human workers to lift 200 pounds of heavy machinery. • Teslasuit- It is wearable smart clothing or outfit which is used to provide haptic feedback, to track the consumer’s movements and to control the consumer’s temperature.

Region-wise, North America dominated the market in 2019 and is expected to maintain its dominance at a CAGR of XX% during the forecast period. The US and Canada are the major contributors behind the growth of the market in the region. The growth is attributed to the growing and early adoption of human augmentation devices by various end-users across the region. Increasing investments in artificial intelligence technologies, increasing demand for wearable augmentation devices from the healthcare industry, and growing technological advancements in virtual reality are driving the growth of the market in the NA region. The objective of the report is to present a comprehensive analysis of the Global Human Augmentation Market including all the stakeholders of the industry. The past and current status of the industry with forecasted market size and trends are presented in the report with the analysis of complicated data in simple language. The report covers all the aspects of the industry with a dedicated study of key players that includes market leaders, followers, and new entrants. PORTER, SVOR, PESTEL analysis with the potential impact of micro-economic factors of the market have been presented in the report. External as well as internal factors that are supposed to affect the business positively or negatively have been analyzed, which will give a clear futuristic view of the industry to the decision-makers. The report also helps in understanding Global Human Augmentation Market dynamics, structure by analyzing the market segments and projects the Global Human Augmentation Market. Clear representation of competitive analysis of key players by Application, price, financial position, Product portfolio, growth strategies, and regional presence in the Global Human Augmentation Market make the report investor’s guide.